Jameson whiskey, ginger ale, and lime add up to the classic Jameson and Ginger Ale cocktail.

This is an incredibly simple, refreshing drink that even non-whiskey drinkers typically enjoy.

Are you a whiskey drinker? While Sean enjoys scotch every now and again, I’ve never been a big fan.

In the past, I have typically leaned towards bourbon whiskey for drinks like this Whiskey Smash. (And you already know that I do enjoy that one!)

However, after spending a few hours participating in the Makers Experience with Jameson Whiskey a few years ago, I’m hooked on the flavor combinations that are possible with this scotch whiskey.

In case you’re wondering about the different spellings of whiskey, we learned that Irish and American whiskeys are spelled with an e and Scottish and Canadian whisky are typically spelled without the e.

Both spellings of the word, whiskey and whisky, are correct. The spelling is an easy way to determine the country of origin.

And to further add some confusion (further attempt at clarification) Jameson whiskey is made in Ireland, however, it is a scotch whiskey, not a bourbon.

In this instance, “scotch” refers to the fact that Jameson whiskey is made with malted barley, while bourbon whiskey (aka Kentucky bourbon) is distilled from corn.

Now that I’ve likely shared more about whisky and whiskey spellings than you ever knew you didn’t know, I want to give you a peek into the Jameson Distillery on Bow St. in Dublin, Ireland.

Every bottle of Jameson sold today is distilled in Cork, Ireland and bottled in Dublin, Ireland.

This is why a bottle of Jameson sold in Ireland tastes exactly the same as a bottle sold in the states or in Canada or anywhere else in the world.

We tasted several different varieties of Jameson whisky and believe it or not, my favorite was the original. I’m much more likely to mix whisky with something else in a drink, than I am likely to sip it on its own.

Jameson original is perfect for mixing and for sipping, making it perfect for Sean and I both. If you’re new to Jameson, simply mixing it with ginger ale is a terrific place to start.

At the end of our whiskey mixing and tour of the old distillery, we headed for the bar to try a Jameson cocktail. I opted for the classic Jameson & Ginger Ale and it was delicious!

It’s hard to believe that it has taken me nearly three years to get this posted here! (We were in Ireland in September 2018!) I’m super happy to finally be sharing this drink with you!

True story, I thought I shared this right after we got back home. I remembered writing it and making the cocktails too.

I was trying to find the post on the website a while back and realized it was still sitting unpublished in my drafts folder.

I’d written it all up while we were in Ireland and then the sunshine didn’t cooperate and I never took photos of the drink.

Well, my forgetfulness is today’s reward, because I very happily mixed up a couple of drinks, snapped a photo, and shared a drink with Sean after a long day outside last week.

This is a classic Irish cocktail that has been popular for well over a hundred years.

In 1780, John Jameson established a way of making his triple-distilled Irish whiskey that we’ve been proudly sticking to ever since.

Combining the two was brilliance on someone’s part many many years ago. I’ve also seen this drink called a “whiskey ginger,” “Jameson ginger,” or even an “Irish buck.”

The combination of whiskey with a light ginger or citrus soda is a terrific one. If you’re like me and prefer it a little lighter and less sweet, I like to add soda water (sparkling or seltzer water) to taste.

My personal favorite combination is 1 part Jameson, 2 parts Ginger Ale, a whole lot of lime, and about 2 parts soda water. (Feel free to kick up the Jameson a bit too, if you’re adding more soda.) 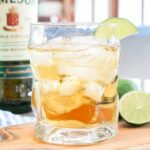 The post Jameson and Ginger Ale appeared first on Barefeet in the Kitchen.

Originally posted at Bare Feet in the Kitchen